One can classify spinnakers as :

It is well known that the spinnaker gives the fastest sail performance for a yacht on off-wind courses and up to max. 60 degrees on the wind.

The spinnaker is an absolute must for the regatta sailor, but even nowadays, for many cruising sailors it is often little used.

Especially in light wind conditions, it is the relatively heavy cruising and charter yachts which could most benefit from the power of the spinnaker.

For example, the Mediterranean in the summer months, when most are out sailing, is often plagued by very light winds. A time to enjoy spinnaker sailing !
But all too often the motor is started and the spi stays in the sack.

WHY ? The reason is that the classical symmetrical spinnaker has the reputation for not being the most manageable of sails. The development of the Spi Sock has made the spi easier to handle, especially for shorthanded crews, but the inconvenience of setting the spinnaker pole remains.

And with the modern roller reefing systems nowadays, quite large yachts are often sailed by shorthanded crews and the spinnaker tends to be considered too big to handle. However, it is also possible, making certain compromises, for small crews to enjoy spinnaker sailing.

On our world cruise on "Tula", a 12.8m sloop, we had a 140 sq.m. classical, symmetrical, tri-radial spinnaker which the two of us flew in many of the world's oceans. Especially in the light wind areas of the Timor Sea, Indonesia and in the Indian Ocean, we enjoyed days and nights of spinnaker sailing and making relatively good speeds despite the light wind conditions.
But we had to make two compromises :
1. We always lowered the spinnaker when the apparent wind reached 15 knots.
2. We used as spinnaker pole, two telescopic poles designed for downwind dual jib sails and fixed on tracks on the mast on port and starboard.

This meant that we always lowered the spinnaker just when the sailing was becoming really exciting. And, when on a reaching course, we had to stow the sail in 12 to 15 knots of wind so as not to overstrain the relatively light poles with the force of this large sail.

The Asymmetrical Spinnaker was developed about 20+ years ago by a number of sailmakers. Thus, the asymmetrical spi and its evolution has resulted in its numerous names, such as Cruising Chute, Blister, Splister, Gennaker, etc.
We, in Rolly Tasker Sails, call it the Multi Purpose Spinnaker or MPS or Gennaker.

The MPS can also be sewn in the three cut designs and each MPS enables a much wider sailing range than a traditional symmetrical spinnaker.

For a cruising yacht, and as their only light wind sail, we would recommend the fairly full cut full-radial MPS - it has fairly full shoulders and can thus be flown well on downwind courses almost as well as a classical symmetrical spinnaker, and usually without having to use the pole. However, for dead downwind courses or with swell, it may be necessary to use the pole to stabilise the sail.
The full-radial MPS is a real all-round spinnaker with a sailing range from 80 to 160 degrees - from close reach courses to broad reaches to downwind, the sail can be easily trimmed, giving an optimal performance, comfort and speed !

In general, one can say that an MPS of up to 160 sq.m., used in conjunction with a Spi Sock, can be handled by a crew of two with relative ease in apparent winds up to 12 to 15 knots.

The joy of spinnaker sailing is something very special and should not be missed !

For more information about sailing with an MPS and using a sock, see the section in this website : Info and Tips -> Setting and Gybing an MPS

If you have any questions or would like any more information, please do not hesitate to contact us. 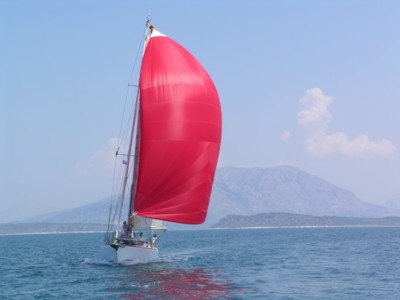